The Life of Lei

“The Life of Leilani” is a unique and up close documentary focused on the everyday life of Leilani Price, a local Drag Queen in the Fresno LGBTQ scene. The film follows Paul Hernandez, Leilani’s name off stage, through his transformations, events, charity work and family life.

Leilani is a flamboyant, comical performer with a witty dialogue and a knack for inspiring. Paul is a more reserved individual who is focused on community outreach and representation. This film takes viewers into Paul’s home and family life, touching on topics such as drug addiction, family conflicts and reconciliations, self doubt, fears, growing up gay as well as lost loved ones.

Throughout her journey as Lei the Drag Queen, Paul is also dealing with internal struggles and pushing through with confidence and determination to be a positive role model and pillar for the LGBTQ community. As viewers, we are invited to follow Lei through her struggles and triumphs, pushing herself to do better, be better and live better. She takes part in countless philanthropic activities such as reading to children while in drag and motivational speaking at schools. 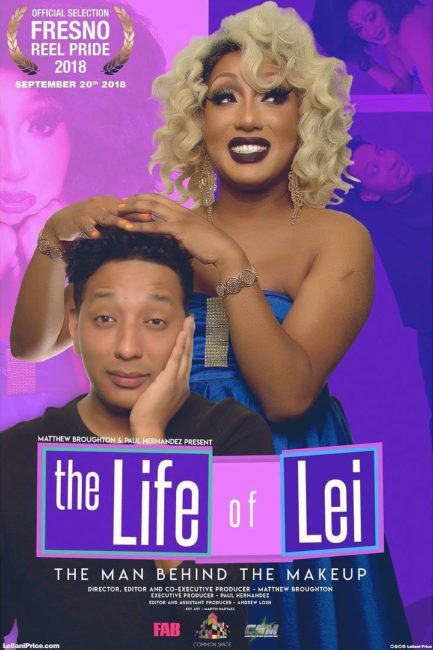 Without a doubt, Leilani and Paul, despite being complete opposites, share one important quality: resilience. This up close and personal perspective allows its audience to grow in their understanding of the complexities of being a gay man, a Drag queen, a brother, a son, a friend, all while taking on society’s pressure to be beautiful and perfect.

Despite his more serious nature as Paul, the film is filled with witty dialogue, honestly funny friends and family interviews and a vivid eyeful of creative talent. Apart from juggling all of his roles, Paul also designs and creates all of Lei’s costumes and props. He also uses his creativity and sewing skills to earn additional funds by creating others’ costumes.

Lei is indeed an entrepreneur and a survivor.

While the film focused on one life in particular, its style and candor clearly shows how this type of hyper-personal focus can reveal the complexities of human life. Paul, albeit an outstanding and caring person, is just one example of the many active members in the Fresno LGBTQ community.

This film makes the case for how important representation is not only for gay men, people of color and drag queens, but for all people who feel marginalized. With her confident spirit and humorous personality, Lei shows anyone willing to listen that members of Fresno’s gay community are just as unique, complex and important as the rest of us.

The audience was receptive and attentive throughout the showcase. It was clear that many of Lei’s biggest supporters were in the room, shouting and cheering in support. After the film, movie goers were invited to The Painted Table for a Q&A session with Leilani herself. Lei was, as always, graceful and witty, answering questions and clearing up some of what was said in the feature.

Supporters filled the limited space quickly, and those of us who managed to get into the Q&A found ourselves in the colorful world of Lei.

It was refreshing to hear the audience members – many who have experienced the same difficulties such as struggling to come out and be themselves – communicating how much they could relate to the film and it’s underlying themes.

Undoubtedly, this documentary is but one of Leilani’s many accomplishments. However, its candor and authenticity make it unique in its nature. Like many of the other viewers, I look forward to more films by and about Lei in order to create more spaces to accept and provide support for the LGBTQ community.