It is easy to see the harmful effects of toxic masculinity in our society.

The socially constructed version of manhood has created a culture of repressed emotions, misogyny and violence – evident in the recent deadly shootings carried out primarily by men, typically by those who felt like they did not achieve success in the way society has defined their manhood.

However, when we think about how our society has created a culture of toxic masculinity and what can be done to eliminate it, we often forget to look at the influences present during our childhood.

It is surprising to see how prevalent toxic masculinity is in children’s entertainment, specifically television and movies. A child is most impressionable during the first five years of their life, making these years crucial to the development of the person they will become. During their formative years, children unknowingly mimic the behavior they have been exposed to. So if we hope to eliminate the effects of toxic masculinity, we need to stop the initial spread of its ideas.

To be clear, examples of basic masculinity in entertainment are not inherently bad. The natural differences between the masculine and feminine traits are not something that should be denied. However, when children are told by the media how they should conform to or live out these traits, it can create a lifelong struggle with identity.

It is no secret that Thomas and Friends has historically been a male-dominated program. With only one female engine, the show has perpetuated the idea that the engineering world belongs to men.

Further, the female characters have little personality and depend largely on the other trains. In fact in one episode, Thomas wins two female passenger coaches as a prize after helping a train get back on the tracks. Afterward, he happily drives around his trophies and gets a “beep, beep” from another train. This encourages the idea of women as objects to be won and possessions to help men achieve happiness. This can be especially harmful to gay or asexual boys who may feel that they will not be successful men unless they are linked with a women.

Recently there have been efforts to make Thomas more gender-equal. Last year, it was announced that Thomas and Friends would undergo changes as part of a partnership between the United Nations and Mattel, Inc. Later in 2018, two lead female characters will be added – replacing two male characters – to the leading lineup of seven trains. These characters will represent different cultures and offer more to the show than a shiny accessory.

This classic is actually an example of a breakthrough for the traditional princess movie. The strength, courage and independence of Mulan transformed the genre and gave inspiration to young girls everywhere. Even with the gender-positivity of this movie, it is still influenced by the societal construct of masculinity.

The song “I’ll Make a Man Out of You” plays off the idea of an aggressive macho man. While it serves as irony to Mulan’s achievement as secretly being a woman and thriving in the army, it is an indicator of society’s dangerous expectations of men.

Mulan demonstrates how toxic masculinity has become our main form of masculinity and taken the role of dictating what a “man” is.

Everyone’s favorite friendly ghost may actually encourage unhealthy social ideas about relationships. Casper essentially becomes obsessed with Kat Harvey after seeing her on TV and wants to “keep” her, making sure that she stays at his house and even gets jealous when she wants to hang out with other boys.

He may be a sweet child-ghost who is just looking for a friend, but he does so in an aggressive manner. Casper basically picks the girl he wants and gets her through a sneaky scheme. This gives boys the false pretense that they can get any girl they want, by any means necessary. 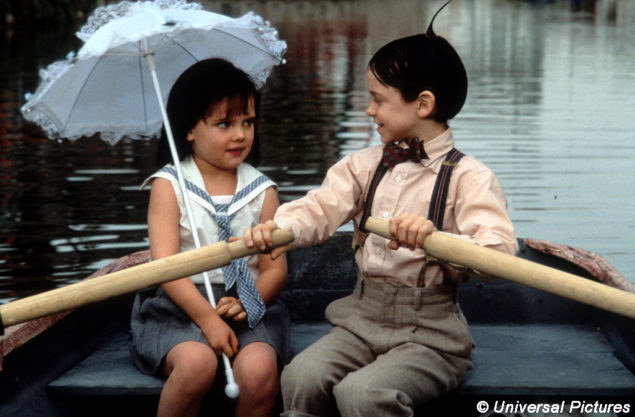 The Little Rascals (1994) is the movie adaptation of classic shorts that aired on television between the 1920s-1940s.  The original TV show itself was actually very progressive, featuring the antics of a group of poor neighborhood kids who equally represented boys and girls as well as multiple prominent African-American characters. While it may have brought the laughs of the original, the movie adaptation fails to give full equality to the genders and actually encourages male dominance in way that puts down both boys and girls.

The relationships between boys and girls in the movie promotes misogyny in subtle ways and flirts with the idea of males as the superior sex. The film centers on the group of boys who are bonded through their “He-Man, Woman-Haters” club, bringing to mind the hyper-aggression of masculinity that exists solely to prove to others that one is masculine.

Throughout the movie, the boys taunt Alfalfa for expressing his romantic feelings for Darla and ridicule him as unmanly, threatening to kick him out of their club. Discouraging boys to express their emotions has long been an aspect of toxic masculinity and is used to train boys to be “manly”. This is especially evident when Alfalfa’s best friend Spanky calls him a “sissified Tweety Bird,” associating Alfalfa negatively with a femininity that contrasted with the “He-Man” mindset.

In addition, the boys’ interaction between girls indicate that there are only two ways the sexes can interact: as enemies or lovers, no in between. The boys are against any contact with the girls at the beginning of the movie, but even when they realize girls aren’t so bad and make their club co-ed, the boys are each coupled up with a girl in an implied romantic way. Further, the personalities of the girls are simply reflections of the boys, indicating a general lack of interest in a girl’s individual personality. This supports the idea that women are accessories to the male experience, the same idea that plagues the entertainment and almost every other male-led industry.

We can change what we see in entertainment, but if we are not changing what tomorrow’s generation sees, they will be pulled into the same pattern of toxic ideals that are ruining our men.